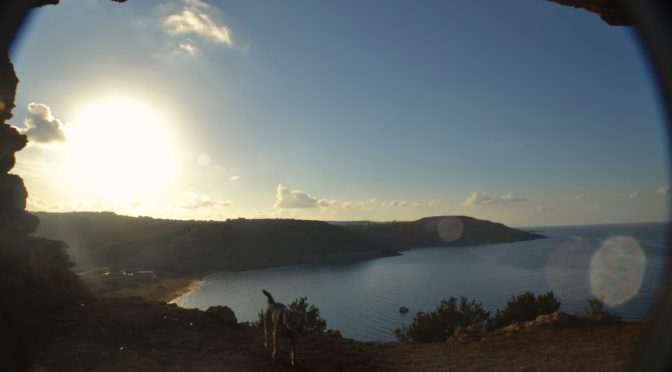 Summer is finally over on Gozo so it’s time to explore a cave!  It has been a long, hot summer which has been great for swimming and going to the beach, but not so good when you want to go off and do over things, like Dylan, my dog. Dylan isn’t too keen on swimming, he prefers to walk. So last weekend when the weather was cool, we took the opportunity to trek to Mixta Cave. Mixta Cave has been on my Gozo bucket list for years. It’s the large cave that over looks Ramla Bay on the north side of the island. Every time I go to Ramla I look up at the cave and say “This year I’m going to trek up there and have a look”, but I never had. Until now.

It was a lovely day, but still a little warm, so instead of heading to Ramla and climbing up we took the back route through the countryside and came out on top of the cave. The cave is accessible from a dirt track just past the cemetery on the way towards Ramla, where there is also a bus stop with an hourly bus towards Victoria. The cave itself is awesome. Its very large and a perfect spot for a picnic, there is even a table there that has been left behind. We spent over an hour there just taking in the view and relaxing. It’s a very chilled out spot. Dylan enjoyed all the smells that the cool breeze was bringing into the cave. He also enjoyed the packet of crisps that I shared with him.

Mixta Cave is great and well worth a visit. I highly recommend walking there rather than taking a car as the countryside really is beautiful this time of year.

NEXT
Translate »
We use cookies to ensure that we give you the best experience on our website. If you continue to use this site we will assume that you are happy with it.Ok