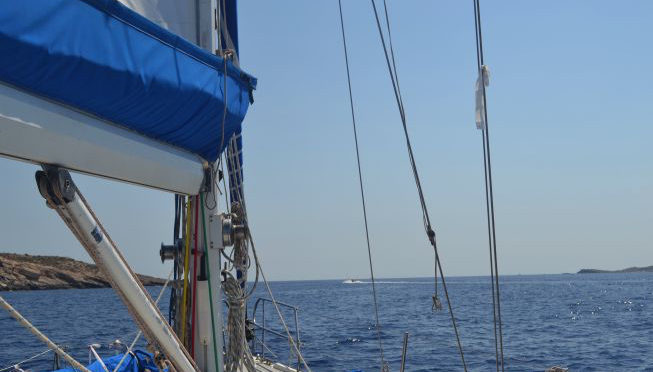 I had a fantastic day today, yachting around Gozo and gaining a whole new perspective of this beautiful island. On Thursday I received an invitation to join Captain Judy on board the good yacht Scorch for lunch and trip around the island. How could I refuse such an exciting opportunity?

(Beware this blog involves underwater cave monsters and is not for the faint hearted). I was slightly nervous about the trip. I had never met Judy before and was anxious about spending the day on a yacht with a group of strangers, but when she met me at the pontoon, my fears left me as she was very welcoming and I knew we were going to have a great day. Once on board I was introduced to the rest of todays gang, Emma and Mark a couple from Qala. They had been out on Judy’s yacht a few times and today they would be crewing it. We left Mgarr at 10.30 on Friday morning and headed east around the island.

It was a boiling hot day, but as soon as we left the harbour and got out to sea we were treated to a cool breeze which stayed with us all day.

Everybody was a lot of fun. I learnt that Emma was a keen sailer and had sailed boats all around the world and that Judy was about to embark on an epic trip to the Caribbean, via Cape Verde. I was in very safe hands.  The sea was very calm today, but even though there was a breeze, the wind wasn’t on our side and so we relied mostly on the engine.

We left Mgarr Harbour and headed east past the Tac-Cawl Cliffs and Hondoq Bay towards the edge of the island. At the beginning I found it quite difficult to take pictures as you really have to try and become at one with the yacht, as it sways up and down and rocks side to side, to try and get a perfect shot.

We passed St Anthony’s Battery on the edge of the east side of the island and followed the coastline round passed Dahlet Qorrot. It was getting close to noon so we decided to stop at San Blas Bay for a swim and some beers.

We pulled into the bay, released the anchor and jumped into the warm, clear sea. The bay looked quite close from the yacht, but once we were swimming we realised we should probably of pulled in a little closer, no worries though, the sea was beautiful.

San Blas is a perfect spot for a day at the beach. It lies at the bottom of a hill so steep it can only be accessed by 4x4s, which puts a lot of people off going, and so they choose Ramla Bay instead.  This means San Blas is very quiet in comparison. At the end of the day you can get a lift back up the hill for only €2 each in a local man’s jeep. That may sound a little steep, but so is the hill, and after a relaxing day at the beach it feels like you are climbing Everest, so I recommend taking the jeep.

We continued around the north of the island, past Ramla Bay and Marsalforn. Our next stop was going to be Dwejra Bay, but that wasn’t to be until much later on, so Judy put the yacht on autopilot and we relaxed and enjoyed the spectacular scenery. Everybody had their own facts, secrets and stories to share about the island. I came away learning quite a few new things and found out about a couple of secret bays that I would like to visit in the future.

PREVIOUS
NEXT
Translate »
We use cookies to ensure that we give you the best experience on our website. If you continue to use this site we will assume that you are happy with it.Ok